As a young child, Mitchell “Mitch” Heyd would spend countless hours with his beloved toy cars, taking them for a spin along roads drawn onto cardboard. Now, as a young adult, Mitch is still forging his own road ahead and still passionate about automobiles—only now he gets to work with the real thing, excelling beyond his childhood dreams.

Mitch had always been a hard worker and had pursued employment roles such as cleaning at a local school board, but he knew he eventually wanted to advance his skills in an area he was passionate about. Fortunately, in the spring of 2018, Mitch connected with Shane Campbell of City Centre Collision CSN in North Bay, Ontario as part of a Student Links mentorship. Shane was able to provide Mitch with invaluable guidance on how to combine his long-standing interest in automotive mechanics with his penchant for computer technology.

“I wanted to make a positive change in both my life and someone else’s.” Shane explains.  “I felt the need to give whatever I had to offer.” 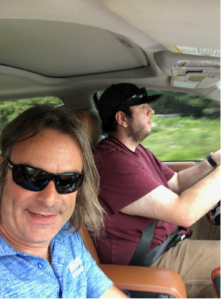 Though Mitch’s mentorship with Shane did take some time to find, once connected the two were dedicated to establishing a valuable experience. The pair proved to be an instant match, with Shane giving Mitch the keys to the mentorship, which allowed him to steer the experience in any direction he wanted. This allowed him to learn and explore at his own pace, eventually giving him the opportunity to prove that he had the capacity, character and skills to do the work.

Mitch’s hard work has paid off: Even though the formal Student Links mentorship is now over, he continues to work with Shane- only now as a paid employee at Shane’s shop. Mitch has even found an opportunity to exercise his compute technology skills in the shop.

“We’ve got two big machines in here: We have a server which has all the clients’ information, but we also have a diagnostic scanner that we use to scan cars when they come in and before they leave,” Shane explains, adding that he’s been trained on how to use these sophisticated computer systems.

When asked about the experience from a mentor’s perspective, Shane said, “My favourite part is honesty, and he’s genuinely cares about people. He works for me, so him and I have a special bond that’s different from other employers, which I find kind of cool.”

Mitch and Shane’s relationship has grown into a bond that has transcended both their initial mentorship as well as their professional relationship. Their friendship includes sharing things they have in common outside of the shop, such as playing pool together once a week. Shane also gave Mitch guidance and support by taking him out driving when he found out that Mitch wanted to obtain his driver’s license.

That kind of guidance and support is what Shane has been able to offer Mitch on the streets of North Bay and beyond—but it’s always been Mitch in the driver’s seat, and the road ahead is filled with endless possibilities.

Processing...
Thank you! Your subscription has been confirmed. You'll hear from us soon.